You are here:
generalThings to do 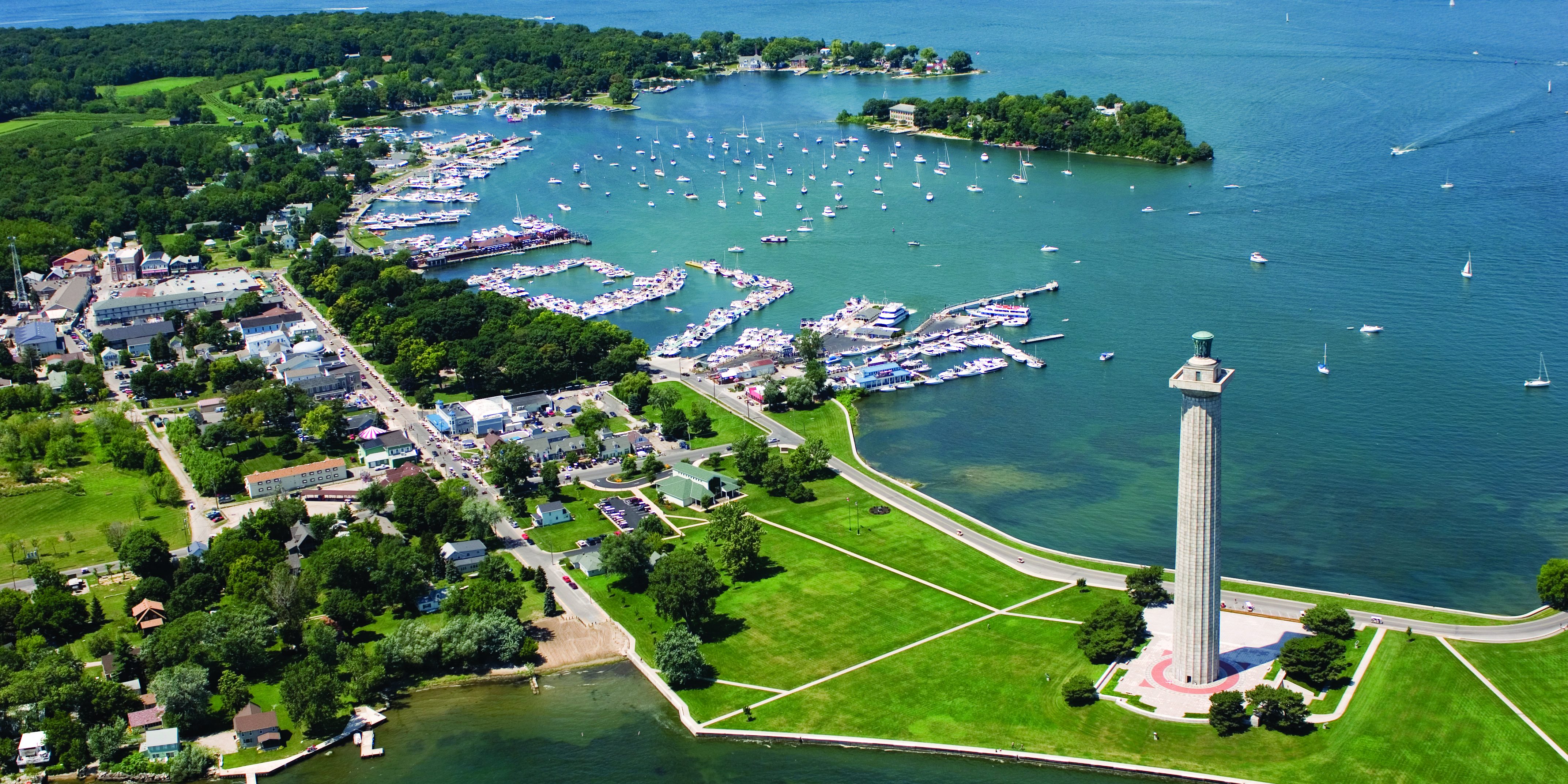 When approaching Put-in-Bay, one of the most famous Lake Erie Islands, a magnificent structure captivates the eyes.  352-feet tall and hearkening back to Ancient Greece, the Put-in-Bay Monument stands as a beautiful testament to Ohio’s rich history. 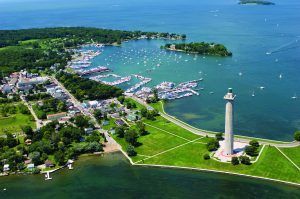 The Put-in-Bay Monument, which is officially known as Perry’s Victory and International Peace Memorial, is one of the nation’s tallest monuments.  In fact, only the Gateway Arch, San Jacinto Monument, and Washington Monument are taller.  Surprisingly, Perry’s Monument is the world’s largest freestanding Doric Column (a pillar in Ancient Greek architecture used to support buildings).

The pillar is made of hollow concrete with pink, granite facing.  That’s right:  Although the monument appears to be white from a distance, it is actually made of pink rock.  The column features twenty large grooves, with fine lines edged into each granite block.  These unique details create a dazzling, gem-like appearance that onlookers notice almost immediately. 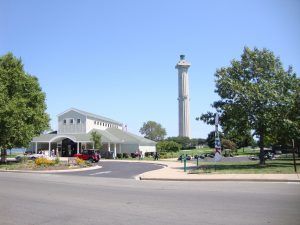 The Origins:  The Battle of Lake Erie

One of the most important battles in the War of 1812 occurred on September 10, 1813.  In the Battle of Lake Erie, nine American ships, under the command of Oliver Hazard Perry, captured six British ships (and 306 soldiers). [PIC – Perry] Put-in-Bay (also known as South Bass Island) was Perry’s base of operations, and from the harbor, he was able to lead the Americans to victory.

This achievement marked a turning point in the war.  It not only prevented Britain from moving toward the central United States along the waterways, but it also allowed the American forces to invade Canada and defeat the British at the Battle of the Thames.

The Battle of Lake Erie featured 27 American and 41 British casualties—including three officers on each side.  While the soldiers were buried at sea, the six officers were buried side-by-side on the island, in a clearing, underneath a sole willow tree.  This “Lone Willow” served as the only memorial of the battle and Commodore Perry’s victory for many years.

In 1852, however, a group of passionate leaders, thinkers, and veterans recognized the significance of Perry’s triumph and began a movement to build a monument to commemorate the battle.  Thus, began a long and lengthy struggle to construct Perry’s Victory and International Peace Memorial.

It was on that Independence Day weekend in 1852 that A.P. Edwards, the Put-in-Bay island owner, gave control of the island to military commander Captain R. R. McMeens for a three-day celebration that would culminate with an extravagant ceremony on Monday, July 5th.  Four steamboats brought 2500 people to the island, and, on the way there from Sandusky, a formal committee was born:  The Battle of Lake Erie Monument Association.  Although that action was a positive step forward, the Association created a constitution that called for 25 vice presidents on the board of directors.  This handcuffed the decision-makers from being able to act swiftly and effectively.  As expected, with that much bureaucracy, not much else was done.  (Plus, the next few years featured a cholera outbreak, a presidential election, and a general lack of public interest.)

Six years later, in 1858, Put-in-Bay hosted a 45th Anniversary Celebration for the Battle of Lake Erie.  8,000 people from Sandusky, Cleveland, Toledo, Detroit, Erie, and Buffalo visited the island for a day of artillery salutes, music, and speeches from veterans, bands, mayors, and governors.  Eight steamers, 24 sailing vessels, and a fleet of naval ships docked in the bay, and, amid all the fervor and fanfare, the Association was re-structured.

That day, the owner of Gilbraltar Island (which is about one mile off the coast of Put-in-Bay), Joseph de Rivera St. Jurgo, offered one-half of his island as a site for the monument. 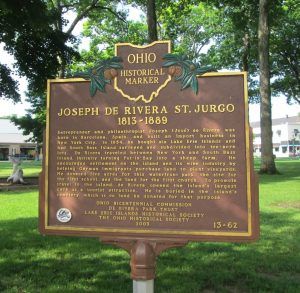 The Cornerstone of Hope

The following year, at the celebration on Sept 10th, 1859, 15,000 people attended the ceremony to place the cornerstone for the monument.  The Association had commissioned Cincinnati sculptor T.D. Jones to design a column.  His plan included a 160-foot-tall pillar with an 18-foot statue of Commodore Perry at the pinnacle. 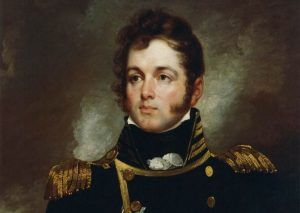 Masonic officials traveled the short distance from Put-in-Bay to Gilbraltar and sealed the following items in an airtight box within the stone: The Declaration of Independence; the United States, Ohio, and Battle of Lake Erie Monument Association Constitutions; the Bible; some coins; some newspapers.  It appeared that the hope for a proper memorial would soon be realized.

The Civil War, A Sale, and A Denial

Regrettably, the monument’s construction was further postponed.  The Civil War began in 1861, which diverted attention from the project, and, a few years later, in 1864, Jurgo sold Gilbraltar Island to Jay Cooke, a Sandusky-born businessman.  The island deed contained a clause saying that the land was “…subject to rights…of…the Battle of Lake Erie Monument Association….”

Soon after purchasing Gilbraltar, Cooke built a small monument—a pedestal with an urn on top—on top of the cornerstone with the following inscription:  “Erected by Jay Cooke—Patriotic Financier of the Civil War—to Mark the Corner Stone of a Proposed Monument Commemorating Commodore Perry’s Victory at the Battle of Lake Erie—Sept 10, 1813. ‘We have met the enemy and they are ours.’” 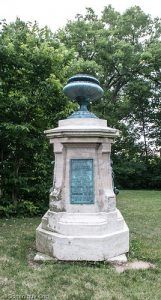 Although the cornerstone now featured “something,” it was hardly the memorial the Association had hoped to erect.  Folklore suspects that Cooke created his shrine to satisfy the deed’s language and prevent the Association from taking the one-half of the land.

Four years passed, and, in 1868, at the 55th anniversary of the battle, the Association proposed to build the monument on Put-in-Bay instead of Gibraltar.   As in previous cases, there was much fanfare with little progress.

At the following year’s celebration in 1869, the Association decided to create the monument near the “Lone Willow.”  Only about 4,000 people attended the observance, and the board failed to obtain nearly enough support or fundraising.

A few decades later, after years of no tangible progress, former President Rutherford B. Hayes partnered with the Maumee Valley Monumental Association and sought congressional funds for a monument.  Congress denied their request, creating yet another setback.

A “Weeping” Willow and a Pyramid

Finally, in 1899, there was a “monumental” breakthrough.  The United States government began donating Civil War cannons to “memorial societies” that wanted to use them for decoration.  So, the island applied for (and received) eight cannons and 88 cannon balls.  Various officials argued over freight prices, bills, and transport responsibility for an entire year before the cannons were placed in the village park.

Meanwhile, the “Lone Willow” over the deceased officers had decayed and fallen.  So, in 1900, the Association arranged the Civil War cannon balls over the grave.  Still, the desire for a better, permanent memorial persisted….

Eight years later, the director of publicity for the Put-in-Bay board of trade suggested that the island host a “great centennial celebration” for the Battle of Lake Erie from June to September 1913.  The board connected with Ohio’s state government and raised $182,550 for the festival and memorial.

In 1909, the movement began to swell.  Leaders decided to ask other states to participate in the event because of their involvement in the war.   (For example, Rhode Island was asked to participate because Commodore Perry was a native, and Kentucky was invited because of the soldiers who contributed in the efforts.)

By 1910, ten states had agreed to participate in the centennial celebration and the construction of the memorial.  Famous architect John Eisenman created a monument design with a sleek, modern look to generate more buzz and interest.  And, finally, after many years of toil, an official site on Put-in-Bay was approved. 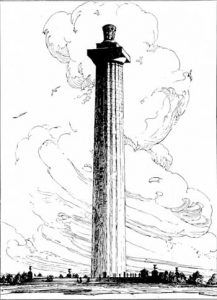 One year later, following decades of defeat and disappointment, the memorial project received $250,000 of congressional aid.  President William Howard Taft suggested that the newly-formed National Fine Arts Commission hold a contest for best monument design.  147 firms applied to the competition and 82 were admitted.  Some of the 82 firms dropped out and 54 exhibits were presented in January 1912.  The winners were New York City designers Joseph H. Freedlander and Alexander D. Seymour, Jr.  (Their original model included a museum and colonnade, which were never built because of money concerns.)

In 1912, excavators began clearing the land and building the monument.  On September 11, 1913, the day after the centennial celebration, there was a second burial of the officers.  And, finally, on June 13, 1915, the Perry’s Victory and International Peace Memorial opened to the public.   In contrast to the extravagant celebrations of the past, there were no elaborate ceremonies to mark its true commencement.  The monument became a major tourist attraction from the moment it opened, and, on June 2, 1936, the memorial was placed under federal control and supervision.

Since its official opening, the monument has undergone certain repairs and has been at the center of new celebrations.  Perhaps the most notable festivity occurred at the 150th anniversary of the Battle of Lake Erie in 1963 with the unveiling of the peace plaques.  The United States Plaque reads like this:

“This single column commemorates the end of a battle and the heralding of a lasting era of peace between Canada and the United States—two neighbors dedicated to brotherhood and progress within the family of free nations throughout the world.  It provides lasting testimony that our common values of freedom and diversity can be attained and strengthened through mutual respect and regard.” -John F. Kennedy, White House, 1963

The Canadian plaque is inscribed this way:

“This plaque is dedicated to the 150 years of peace which followed the War of 1812, in which so many lost their lives, and to the hope that this harmony between two neighbors may be a symbol of international cooperation in a world striving toward the goal of lasting peace.” -Lester B. Pearson, Ottawa, Canada, 1963

The Legacy:  Victory, Peace, and Passion

The Put-in-Bay Monument is not just about a battle, a war, or a government project.  It’s a reminder of peace, safety, and stability.  It’s a tribute to those who built a legacy on the Lake Erie Islands—a legacy that we benefit from every time we visit the Islands.  It’s joy.  It’s freedom.  It’s passion.  And we’re proud to offer a taste of that here at Put-in-Bay. The classic Hotel Victory was named after this victory also!