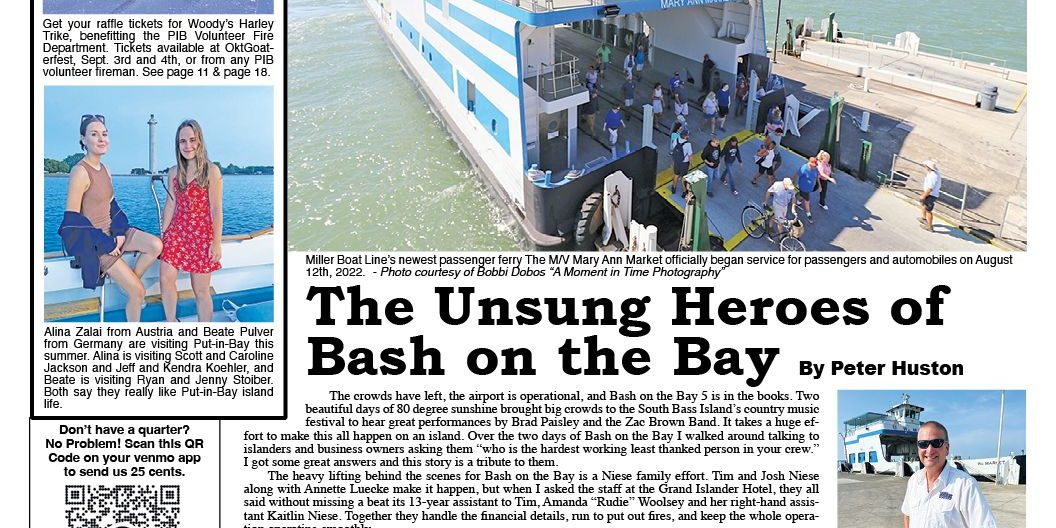 On Sunday, August 7th, descendants of the Morrison family gathered at the corner of Put-in-Bay and Meechen Roads to take part in the dedication of the Edward and Mary Morrison Woods Preserve. Ed and Mary Morrison retried to the island where they lived for many years. Ed was the grandson of James and Fancy Morrison, early settlers of island, and his father Clifford, was among other things, one of the conductors on the trolley that went from downtown Put-in-Bay to the Hotel Victory. With the dedication of the preserve, the legacy of the Morrison family on South Bass Island continues.

The purchase of the Preserve was made possible by a Clean Ohio Conservation Fund Grant and a significant gift from the Mary Morrison Trust through the Lake Erie Islands Conservancy. Consistent with the wishes of their daughters, Patricia Marida and Margaret Morrison, the preserve is named the Morrison Woods Preserve in honor of their parents, Edward and Mary Morrison.

The Park District and the Lake Erie Islands Conservancy (LEIC) are grateful to the Clean Ohio Conservation Fund for its support as well as our donors/members who continue to provide the matching funds for these projects. A special thanks to Marsha Collett and conservation realtor Neal Hess for their continued assistance and expertise. The LEIC’s Mission is to encourage conservation and protection of natural and agricultural lands in the Lake Erie Islands for the benefit of islanders, cottagers, visitors and future generations.

Benches at the entrance of the preserve were donated by Betty and Charles Finkbeiner in memory of the Morrisons and by the Naugle family in memory of David and Sandy Naugle.

And a special thank you to Put-in-Bay Township Park District contractors Mark Lekanka and Richard Gump for trail, sign and bench installation with help from Kenneth Crawford and Doug Woischke. Clean-up of the woods was done by Sue Ferguson, Ashton Speer, Sarah Burlingham, Rudy and Linda Rence, Lisa Brohl, and Amy and Greg Harrison.

The trail loops through a young forest of blue ash, eastern red cedar, black walnut and rough-leaved dogwood. Relax on a shaded bench and view migratory and nesting birds.

After the dedication, refreshments compliments of Patty LoPresti and Heineman Winery, were served at the Nature and Wildlife Center.