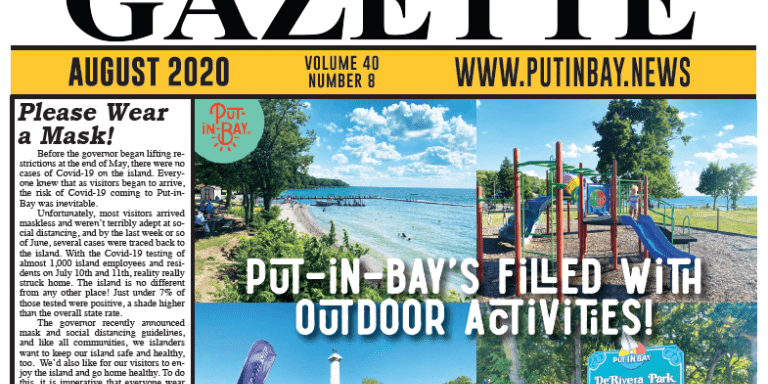 The following piece is published in this month’s Put-in-Bay Gazette. The Gazette has been producing incredible independent Put-in-Bay island news for over 40 years. If you have any interest at all in what is happening on South Bass Island, we urge you strongly to subscribe to the Put-in-Bay Gazette. One-year online subscriptions are only $15, and print subscriptions are available as well. To subscribe please click here.

Every April, the Put-in-Bay Gazette publishes its April Fools edition. Over the years, we’ve had some pretty weird and bizarre stories about island issues, but since the season opened on the island we’ve been reporting stories we could never have imagined for our April issues. The interesting thing is that the stories are all true.

As the island began the 2020 season, the concern was the high water level in Lake Erie. With water level records being broken every month, islanders feared the worst. This shouldn’t be a problem in the seasons to follow, so people can grab their car rentals and safely head on down to beautiful Lake Erie. In fact, if that were the only topic of concern at this point, we all would be dancing a jig on top of the Monument.

The Ups and Downs of the Coronavirus

As things began to shut down in March and April, the outlook for the 2020 season at Put-in-Bay looked bleak. In reality, some island businesses set new records in June as a public anxious to get out swarmed to Put-in-Bay. Apparently, few graduation ceremonies, weddings and professional ball games made Put-in-Bay a great attraction where people could get out in the fresh air and sunshine, plus get back to the ever on-going party.

Unfortunately, there were some who tossed caution aside and didn’t wear masks and social distance. Not only weren’t visitors being careful, but some businesses announced their employees were no longer required to wear masks in part due to state-wide numbers looking pretty good when it came to new cases.

The inevitable happened and when the press reported on Covid-19 cases stemming from and on Put-in-Bay just before the 4th of July, visitation dropped immediately. A drone photo of the downtown docks showed numerous spots unfilled in spite of  the gorgeous weather.

Several businesses took precautionary measures during the first two weeks of July and several shut down for cleaning and regrouping as they waited for results to come back from the mass testing of island residents and employees on Friday, July 10th, which took place at the Put-in-Bay Volunteer Fire Department station. The first day, 667 people were tested in an operation that went like clockwork. As the results came back, Island employers knew they could put healthy workers back to work. Interestingly, if you wanted a test, you could get a test.

But when all was said and done, the island’s June was much like July, and July was much more like a typical June thanks to Covid-19.

With the crowds of June, came an incident that shook the police department to its core. The mayor put police chief Steve Riddle on administrative leave, plus two full-time officers, Michael Russo and Melissa Wilde, resigned after a confrontation on June 6th with several African Americans that made headlines in the mainland press and on the Internet. Mayor Dress’s first choice for interim police chief, Capt. Matt Mariano, was slapped with a Civil Protection Order for sexual harassment by Melissa Wilde. He had to be replaced temporarily by a second interim police chief, Yuri Linetsky. The CPO against Mariano was later dropped by Wilde. Things started to settle down as James Kimble was hired as temporary police chief.

Kimble immediately did a nearly-half-hour video in which he and Ottawa County Sheriff Levorchick were interviewed by Sandusky Register Editor Matt Westerhold. The discussion centered around policing issues at Put-in-Bay, something unheard of with former island police chiefs.

Put-in-Bay is now awaiting the findings of an FBI investigation into two incidents involving Lieutenant Michael Russo, one of the two officers who resigned after the June 6th incident, plus the Village is now being sued by Russo for not being properly paid for the overtime he worked while on the PIBPD.

2020 will be remembered as the “Eventless Summer.” One by one, the popular events and fundraisers everyone enjoys at Put-in-Bay went by the wayside. There were a few that took place, but they were few and far between. The season’s always-popular Pizza Buffet at Frosty Bar and the Whiskey Light Ceremony at the Roundhouse were just two of the early season cancellations. Like an avalanche, the Put-in-Bay Music Festival, the Pooch Parade, Founder’s Day, Pyrate Fest, the July 4th Fireworks, Junior Bay Week, the I-LYA Regattas, Bash at the Bay, the Miller Boat Line 5K, the Road Race Reunion and others slid into the abyss of the Island’s event schedule.

There were a few events that took place; Soccer players played in the Put-in-Bay Soccer Tournament the weekend after the 4th of July, plus more than 150 Jeep owners brought their tricked-out vehicles to the island the following weekend to take part in the 5th annual Jeep Invasion.